Ten Days to Burn it Down 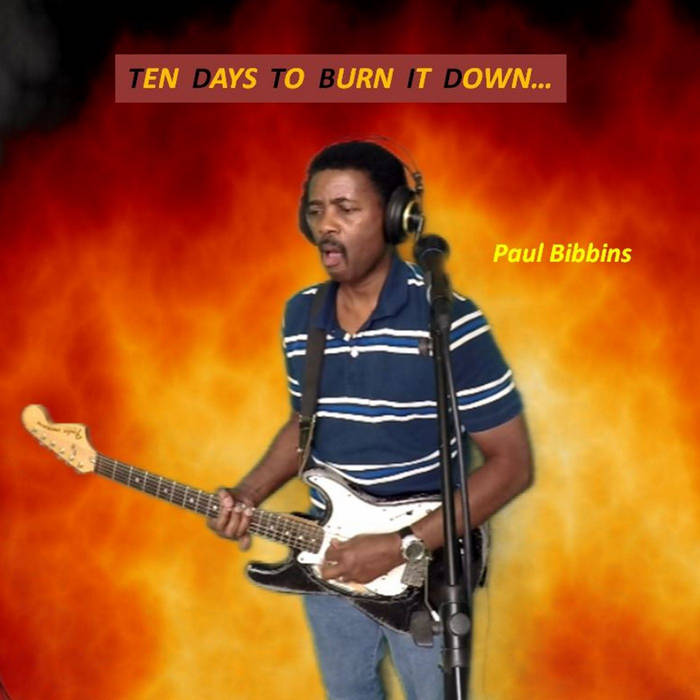 I’m not a professional musician; which means that I’m free to be me! So rather than write this in third-person, I wrote in first-person; which I prefer…..

People say that there's nothing musically different being produced in rock 'n roll these days...and that everything sounds the same. But what I'm offering musically, is about as different as different can be for rock 'n roll songs. My songs are Hendrix-inspired, supremely original, funky and rockin’, and peppered with odd time signatures!

I’m originally from New Orleans, but in late 2005 Hurricane Katrina uprooted me to Texas; and I’ve lived in the Dallas area ever since.

The lyrics of my songs never come from personal experiences…it’s just not in me to write songs that way. If I tried writing a song about some personal experience or life experience, it would probably sound contrived or forced. As a result, listening to the lyrics of my songs won’t tell you much about me, my beliefs, or my thought processes. The one exception is the title track to my latest album, Ten Days to Burn it Down. The full name of the title track is, “Ten Days to Burn it Down (a requiem for the 45th). This song is a rockin’ & funky anti-Trump anthem. At least, I’d like to see people buy the song, and spread it around, and actually turn it into something of an anthem!

My guitar playing odyssey began in 1973 when I was 17 years old. That’s when the guitar-playing bug bit me. I hadn’t played any other musical instruments before then; and my initial plan was to become a bass player. But when I heard the funk rock lead guitar playing of Omar Mesa in “Fencewalk” by Mandrill, and Ernie Isley in “Summer Breeze” by the Isley Brothers, and I heard all those great 1970’s guitar-driven rock ‘n roll radio hits, such as “Smoke on the Water” by Deep Purple, with Ritchie Blackmore burning it up on lead and rhythm guitar…the choice was made. It would be electric guitar for me…or nothing at all.

After saving up my pennies, I went out and bought my first electric guitar; which was a cheap no-name hollow body guitar that I found at a local New Orleans music store. I started out playing guitar right-handed for the first six months; but then I bought a Fender Stratocaster guitar, and switched to playing left-handed…ala Jimi Hendrix. I still play guitar left-handed today; but I am right-handed.

That’s all pretty normal stuff; except for me switching from playing guitar right-handed to playing left-handed. But here’s where my story really veers off the well-traveled road: The first few years of playing any given musical instrument are the formative years where you form the core of your skills on your chosen instrument. My formative years were spent in essentially my own little musical cocoon. For the first five years after I picked up the guitar, I literally stayed caged up in my room, and all that I played on my guitar was whatever musical ideas and guitar riffs that came out of my head…good or bad.

Musicians typically are at their most creative point when they are young. Thankfully I had enough common sense to tape record myself playing all those songs and guitar riffs that I created during my beginning five years of playing guitar. I had an Akai reel-to-reel tape recorder at that time…and lots of reels of blank tape; so I recorded damn near everything that I could. Some of my best songs were created during that time. In the 1980’s I transferred all of those recordings from reel-to-reel, onto cassette tapes. Over the years I’ve written many songs…but without a doubt, my most wildly creative material dates back to the 1970’s. A few of the songs on my Ten Days to Burn it Down album go back almost 40 years. I still have those old cassette tapes…with a lot more songs and ideas on them; just waiting for me to fully develop them and put them out to the public!

During those first five years I never tried to learn songs off of records or albums, or use a metronome, or jam with other musicians. So in essence the formative years of my guitar-playing life were void of the rules of timing or song structure. I had no real sense of timing; whether it be 4/4 time, or otherwise. I played everything in free-form fashion. There was no method to my madness back then. I was just young, with no real musical goals or aspirations at that time, and totally clueless about the value of learning from others, and from records, and on working on your musical timing.

Although I wasn’t into trying to learn Hendrix songs at that time, I did however, listen constantly to Hendrix albums. So Jimi Hendrix crept into everything that I did, without me even trying. Jimi remains my primary musical influence to this day!

In this life though, one thing almost always leads to another… That whole process of me playing guitar without any musical boundaries (timing or otherwise) during those initial five years, is exactly what led to me having a musical sound that I can call my own; and which also led to odd-timing being an integral and signature part of my guitar playing and song writing. Several musicians have told me that the odd-timing in my musical compositions sounds natural, not contrived. I’d have to say emphatically that odd-timing comes to me naturally because that is the arena that I played guitar in from the very beginning.

I’ve never had guitar teachers, or people who’ve mentored me on guitar. It’s always been the case that I just want to figure things out for myself on guitar…which, in the big scheme of things, helped to stamp my musical sound as my own.

It wasn’t until later on, for purposes of doing cover songs with my various power trios, that I got into learning from the records and albums of musicians like Jimi Hendrix, Stevie Ray Vaughn, and Robert Cray; all of which brought me into the world of traditional musical timing (4/4, 3/4, etc)…which was an absolute necessity.

A real benefit that I especially got from learning Jimi Hendrix and Stevie Ray Vaughn records was that I learned how to project power in my guitar playing; how to really attack my guitar, and make my guitar riffs and solos really mean something!

Ten Days to Burn it Down marks my third self-released album. But it differs from my previous album efforts in the quality of the audio on the tracks. With the aid of lots of YouTube videos I was able to get a good grasp of mixing techniques such as parallel compression, frequency space filtering, and other mixing tips; as well as tips and tricks from mastering engineers on how to properly master musical tracks. I mixed and mastered all the songs on this album, using just a pair of good studio headphones (meaning in the box) and virtual mixing room software. The audio quality doesn’t quite rival the big-boy professional studios, but I am very excited and satisfied by the sound quality that I actually achieved.

For better or for worse, I wear all the hats on this album: song writer, guitarist, bassist, vocalist, producer, recording engineer, mixing & mastering engineer, and drum programmer. Yes, I programmed the drum parts for all the songs myself…on my trusty, but rapidly aging Boss DR-880 Rhythm Machine; which I’ve had since 2005. I can’t play a lick of drums…but I can do some damage with a drum machine. The songs were all written by me.

If you haven’t guessed it by now.…I am the ultimate do-it-yourself guy!

Don’t get me wrong: the rock-n-roll power trio is my thing, or thang, as some would say. But the power trios that I put together over the years never lasted for very long, or went anywhere; so I have never built a name for myself as a performing musician. I have been a 9 to 5 working stiff all my life. I currently work in IT as a Network Engineer.

Bandcamp Daily  your guide to the world of Bandcamp